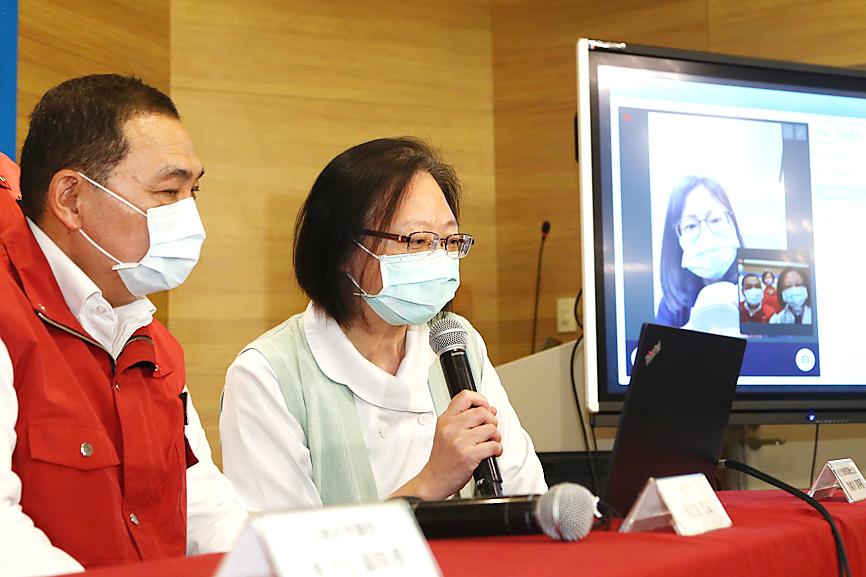 FREEING UP BEDS: The shift to home quarantine came as the nation reported its second-highest daily increase this year and signed a contract for more treatment drugs

New Taipei City residents aged 65 or younger who contract COVID-19, but are asymptomatic or have only mild symptoms can now quarantine at home, the New Taipei City Government said yesterday, as it adopted a new Central Epidemic Command Center (CECC) protocol on a trial basis.

Given the “shockingly high” transmission rate of the Omicron variant of SARS-CoV-2, and that most of those infected only have mild or no symptoms, the city is asking people who meet certain conditions to quarantine at home, New Taipei City Mayor Hou You-yi (侯友宜) told a news conference.

CECC data showed that 99.6 percent of those infected so far this year had mild or no symptoms.

To prevent the city’s medical system from being overburdened, with the number of cases is expected to rise sharply, people aged 65 or younger, who are not pregnant and not undergoing kidney dialysis, should isolate at home, Hou said.

“Moving forward, our medical team will conduct telephone interviews with confirmed cases to determine whether to send them to hospital or centralized quarantine, or to advise them to self-isolate at home,” New Taipei City Department of Health Director Chen Jun-chiu (陳潤秋) said.

People quarantining at home for 10 days are required to install the iCare smartphone app, which connects to health-monitoring devices through Bluetooth and sends data to city hospitals, she said.

People in home quarantine must also fill out a health questionnaire three times per day and videoconference with medical staff on their mobile devices, she said, adding that if a person’s health appears to be deteriorating, they would be admitted to a hospital.

The city is also working with the New Taipei City Pharmacists’ Association to remotely prescribe medications, which would be delivered within 24 hours, she said.

Separately, Taiwan has signed a second contract with US drugmaker Pfizer to procure 350,000 courses of its COVID-19 treatment Paxlovid, which are to arrive by the end of June, Minister of Health and Welfare Chen Shih-chung (陳時中) said yesterday, after the government pledged to gradually reopen the nation’s borders.

The second contract also stipulates that Taiwan has the option to buy another 350,000 courses if necessary, said Chen, who heads the CECC.

The remaining courses of Paxlovid, which Taiwan purchased in its first contract, are to be delivered in batches in the coming two weeks, he said.

Taiwan signed a deal with Pfizer in January for 20,000 courses of Paxlovid, of which 4,800 courses have arrived.

A total of 136 courses have been used so far, Chen said.

The CECC has previously said that Paxlovid can be prescribed to treat mild-to-moderate cases of COVID-19 within five days of the onset of symptoms for adults and children aged 12 and older with a minimum weight of 40kg, if they are assessed to be at high risk of developing a severe illness.

Additional reporting by CNA and Reuters