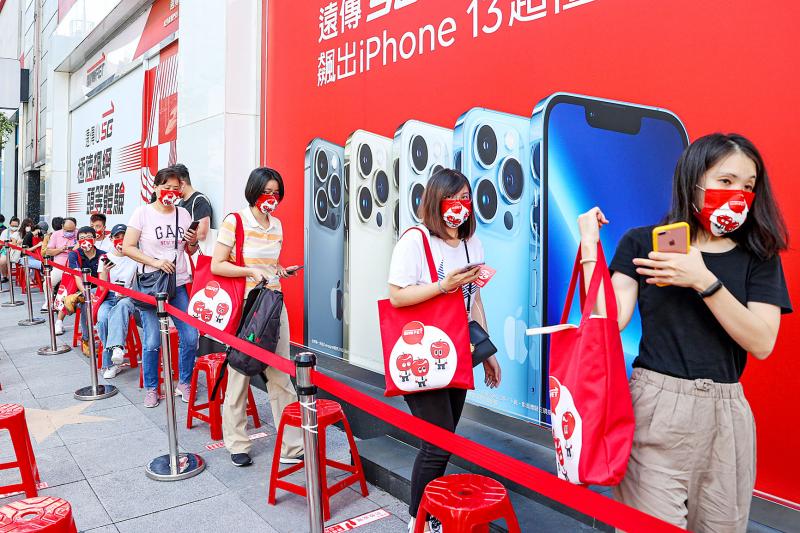 Photo right: People who pre-ordered Apple’s latest iPhone yesterday line up at an outlet in Taipei to pick up their new phones. (By CNA)

Almost all executives from the nation’s major telecoms have a bullish view about demand for the new iPhone series, the second-generation 5G phones from Apple, given performance enhancements and discounted retail prices over previous generation models.

Apple fans have shown a strong appetite for the new models as reflected in the telecoms’ preorders, especially for premium versions, such as the iPhone 13 Pro and iPhone 13 Pro Max, Hsieh said.

As most iPhone users subscribed to high-end packages such as the NT$1,399 offering, the effect on the company’s average revenue per user would be significant, the company said.

Chunghwa Telecom said its 5G customer base is growing gradually toward its goal of 2 million users by the end of this year.

He expects the number of its 5G subscribers to grow 1 percent per month for the rest of the year.

Next year, the growth would be about 15 percent on an annual basis, he said.

Without a “killer app,” the company is unlikely to see any explosive growth in 5G customers before 2024, Lin said.

Far EasTone said that sales of iPhone 13 models were double that of the iPhone 12 series on launch.

Most iPhone buyers opted for its NT$1,399 package, it said.